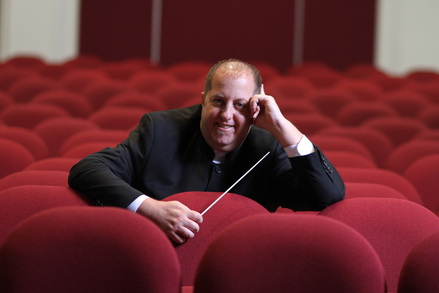 Jason received his Doctorate in Conducting from the University of Missouri-Kansas City. He also holds degrees from Texas Tech University (Bachelor of Music Education) and Southern Methodist University (Master in Conducting). In addition, Dr. Rinehart studied conducting with David Effron and Gunther Schuller at the prestigious Brevard Music Center.

Dr. Rinehart is in demand as a clinician and consultant and has worked with ensembles in Louisiana, Kansas, Missouri, Texas, New York, New Mexico, Oklahoma, Mississippi, California, Ohio and Illinois.

Jason is in his eighth year as third horn with the Monroe Symphony Orchestra and has played with numerous orchestras in Texas, New Mexico, Kansas and Missouri.

In the world of pagentry arts, Dr. Rinehart has been involved with the drum and bugle corps activity for over 20 years beginning as a marching member with the Sky Ryders and Phantom Regiment.  He has previously taught with Pioneer, Capital Regiment, the Boston Crusaders, and served as Brass Caption Head for the Glassmen and Spirit of Atlanta.  He is also an adjudicator for Drum Corps International and the Central States Judges Association.